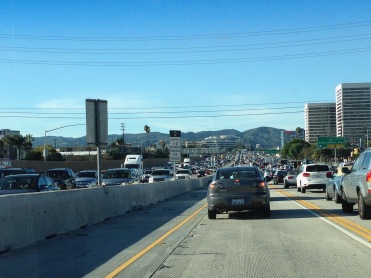 I’ve been driving in Los Angeles for almost 50 years. When I first got my license, I enjoyed driving. That quickly changed, when I had to commute a long distance to work and the freeways became a nightmare any time of day.

With the quarantine in Los Angeles, the roads and freeways are less congested but with less congestion, I’ve noticed more drivers speeding and also running red lights. This week alone, I’ve witnessed a half a dozen drivers running red lights. I’m not talking about when the light is yellow, I’m talking about blatantly after the light had turned red.

On my walk the other day, I was coming up on a 4-stop intersection with a 25-mph zone. I watched in disbelief as a driver speeding at what might have been 40-mph blow through the intersection. Luckily for me, I hadn’t stepped out onto the crosswalk yet.

Most of you fellow Blogaholics, I would guess, have been involved in one or more auto accidents. Some may have been minor but chances are they were major involving someone who was critically injured or died. Several years ago, during torrential rain storms in California, I was  driving on the freeway when my 300Z sports car hydroplaned. It rolled several times before crashing right-side up on a patch of grass next to the freeway. I was able to crawl out through the driver’s side broken window without a scratch. To this day, I could never understand how I didn’t hit any other driver and I wasn’t killed.

One of my favorite movie stars, James Dean who at just 24-years old was driving to a car race competition 85 miles an hour when he hit another car head-on as it crossed the center line. The irony was, a few months earlier, Dean and actor Gig Young filmed a public service announcement for the National Safety Council, warning of the dangers of speeding. Dean, dressed as the Texan character he played in his last film, “Giant,” warned that driving too fast on the highway can be even more dangerous than speeding on a race track, where there are “more rules.” He said he didn’t “have the urge to speed on the highway.” He was supposed to end the PSA by saying, “The life you save may be your own,” but decided to ad-lib, joking, “The life you might save might be mine.” Sadly, Dean didn’t follow his own advice and died way too young.

The 2020 statistics say, 1.35 million people die in road accidents Worldwide every year. That’s  3,700 deaths a day. Which brings car crashes as the 8th leading cause of death for people globally. The number of people killed yearly doesn’t seem to affect people’s bad driving habits. I don’t know about you, but 3,700 deaths a day from automobile accidents is too large a number of deaths and just drives me crazy.

One thought on “Drives Me Crazy”