“I’m such a long-term investor,
I’ve never really let go and celebrated
what I did with the Hubble telescope.”
Story Musgrave 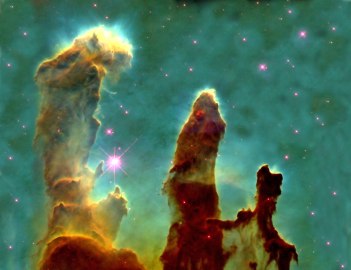 Hubble image of the Pillars of Creation.

The Hubble Space Telescope turns 25 today. When it was launched in 1990, the department I worked with at the Jet Propulsion Laboratory, was responsible for the designing and overseeing the building of the camera for Hubble: The camera was the Wide Field and Planetary Camera (WF/PC).

Unfortunately, within weeks after the launch of the telescope, the returned images indicated a serious problem with the optical system. The cause of the problem was that the primary mirror had been ground to the wrong shape. Although my department was not responsible for this miscalculation, we were all devastated by this error.

My boss was chosen to be part of the task force, The Allen Commission, to locate and correct the problem with Hubble. After several meetings, my boss and I had been discussing over lunch some of the details from the commission meetings. He often would run things by me, because I’m the “think outside the box” type of person. I kiddingly suggested that Hubble needed contact lenses to correct the problem. When I mentioned this to him, his eyes lit up and I could literally see the lightbulb go off above his head. He told me I was a genius, but I didn’t quite understand what I had said.

A few years later, after sharp beautiful images of the solar system were published, my boss sent me some of the images to thank me for helping him solve the Hubble problem.

The Hubble Telescope and its images have helped change our understanding of the age of the universe, the evolution of galaxies and the expansion of space itself. I’m pretty sure, if I had never mentioned to my boss about how to fix Hubble, that someone else would have eventually come up with the same idea. However, I like to think that because of my, Forrest Gump moment, I may have played a small part in the repair of the Hubble telescope.

3 thoughts on “The Hubble Telescope”