“The sea, the great unifier, is man’s only hope.
Now, as never before, the old phrase
has a literal meaning:
We are all in the same boat.”
Jacques Cousteau 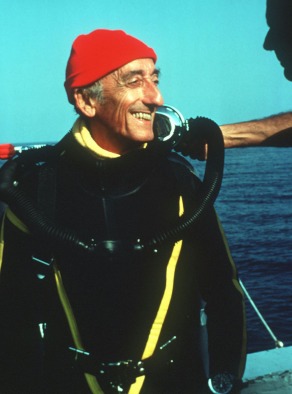 One of my passions that began as a child is my love for the sea and all its forms of life. Growing up in the midwestern United States, the largest area of water I knew were the great lakes.

Having never seen an ocean in person, I was first introduced to the sea by watching the 1950s TV show, Sea Hunt starring Lloyd Bridges.

When my family relocated to California in the mid 1960s, I remember the first day we drove to Zuma Beach. I couldn’t wait to jump into the water. Unfortunately, it was during a riptide and I nearly drown.

My respect for the sea and it’s power grew more towards what was in the ocean and not actually being in the water. So, during the late 1960s to the 1980s I whet my appetite for the sea by watching The Undersea World of Jacques Cousteau. I was hooked on this exciting new documentary style show. I fell in love with the interesting Frenchman in the red bonnet with his charming personality and beautiful ship the Calypso.

Jacques Cousteau with his Yellow Submarine.

Every week Jacques Cousteau this french ex-naval officer, explorer, conservationist, scientist and researcher with his mesmerizing voice would take me on an incredible journey exploring the depths of oceans around the world.

Jacques Cousteau died 25 June 1997, but he left us with a plethora of films, books and research that paved the way for current oceanographers and scientist.

I miss you Jacques Cousteau and all that you gave us, including that wonderful yellow submarine.